Who doesn't love the look of a traditional Butler's Pantry? The Butler's Pantry is making a comeback in American and English homes as part of a resurgence of nesting and homekeeping since the late 1990s. It is one of the most requested features in American homes today, despite larger kitchen sizes than ever before. There is a charm and nostalgia to the pantry, as well as a practical, utilitarian purpose.
Here are some pictures of my favorites: 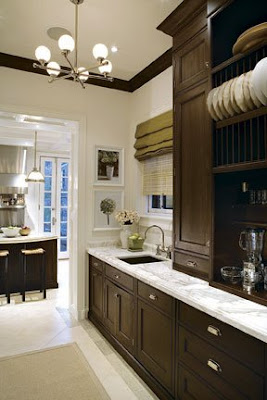 House Beautiful
This lovely pantry is in Washington, DC. I adore the way the upper cabinets sit directly on the marble countertop. I love the use of the traditional marble and bin pulls with the contemporary chandelier. 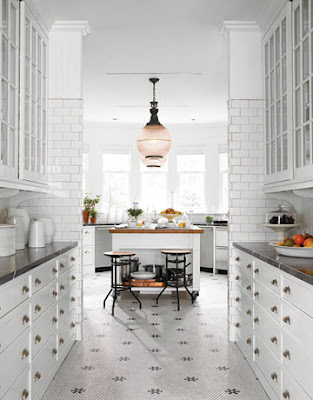 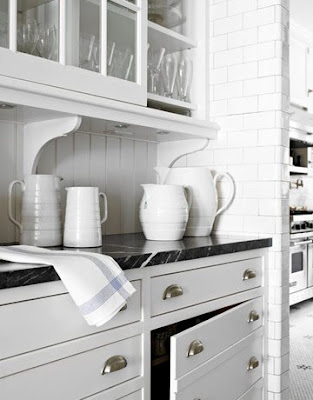 House Beautiful
In America, pantries evolved from Early American "butteries", built in a cold north corner of a Colonial home, more commonly referred to and spelled as "butt'ry", into a variety of pantries in self-sufficient farmsteads. Butler's pantries, or china pantries, were built between the dining room and kitchen of a middle class English or American home, especially in the latter part of the 19th into the early 20th centuries.
The pantry above has drawer fronts which conceal cabinets and appliances. The designer liked the sleek look of all drawers so he had false drawers made to give the pantry an old world feel. Notice also the use of different "period tiles" including hexagon on the floor and subway tiles on the walls. All this topped off with beadboard, veined soapstone and upper sliding cabinet doors.
Here are some other examples: 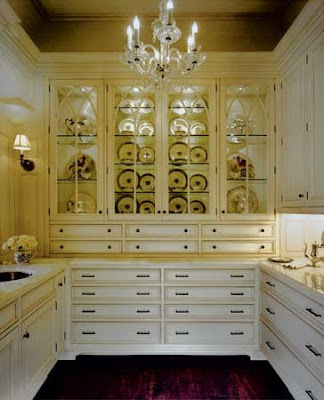 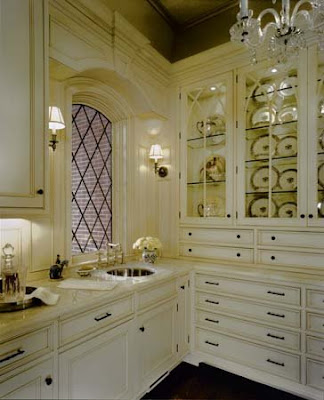 MLS
This is a bit too formal for my taste, but I included it because I think it is interesting to note the wonderful use of lighting in this space. Notice the under cabinet and inside cabinet lighting; the chandelier, sconces and recessed ceiling lights. Very good lighting design that gives this pantry a special jewel box feeling. 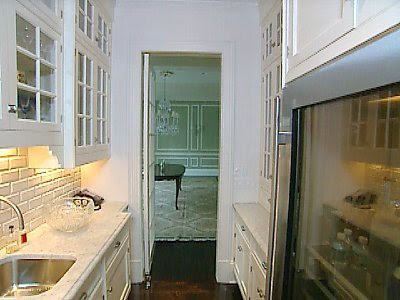 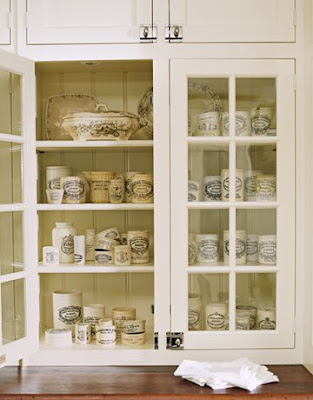 House Beautiful
I love the use of latches versus knobs or pulls and the mahogany top. 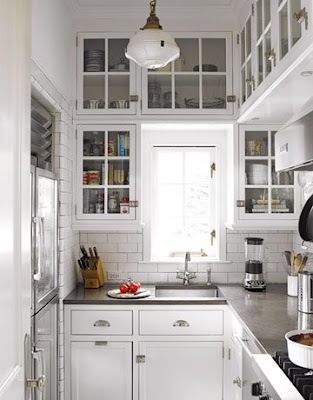 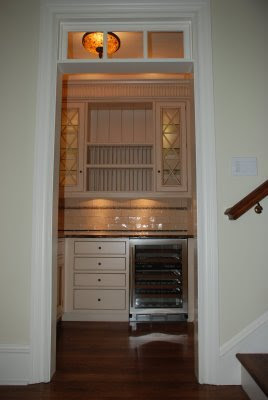 MLS
Again, the use of subway tiles, beadboard , glass doors - are you starting to see a trend?
I live in a classic 1930's Royal Barry Wills Colonial. I have a 7 foot by 8 foot butler's pantry that I am renovating back to its original splendor over the summer. I have had the help of a very talented cabinet maker that shares my vision. Together we have created a very special space. Now you have seen my inspiration photos. Gorgeous cabinetry, latches, bin pulls, glass doors and marble. I am so excited to see it come to fruition. I will share my pictures when it is complete!
Posted by Willow Decor at Wednesday, June 25, 2008 10 comments 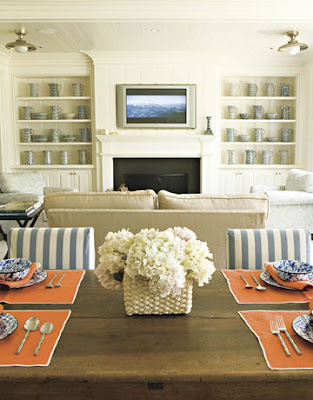 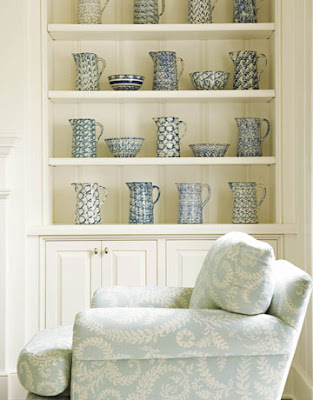 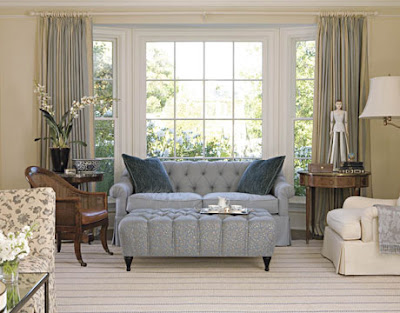 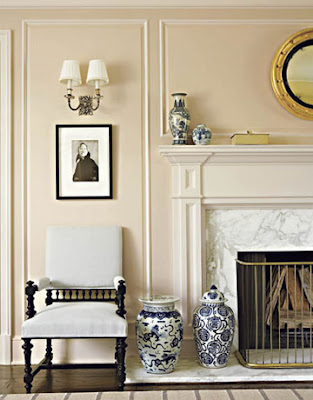 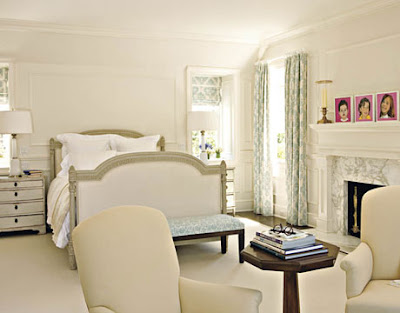 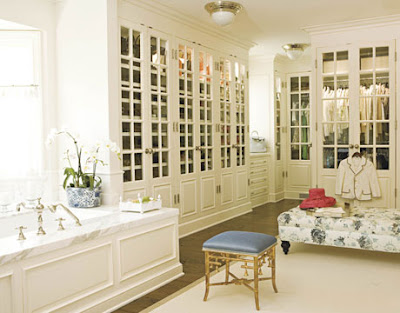 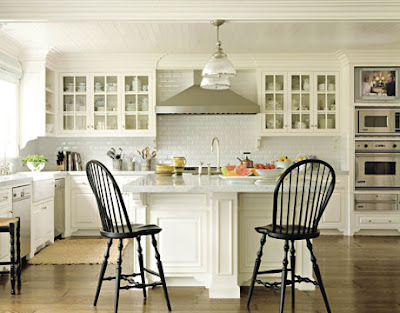 Thanks James Radin -what a lovely home!
Posted by Willow Decor at Wednesday, June 11, 2008 5 comments

Anyone who has picked up a decorating magazine has seen the work of interior designer, Linda Banks. Let's have a look at her home,
Iris Hill in Connecticut.
All photos from Banks Design Associates. 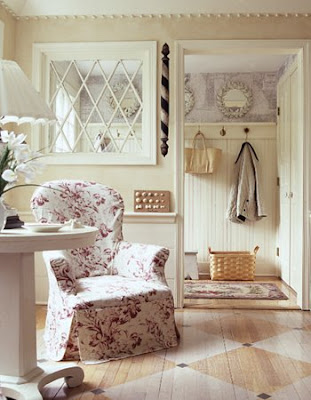 I love this space! From the painted floors to the antique barber shop pole. Don't underestimate the use of interior windows, they add the illusion of space and light. This window is wonderful. 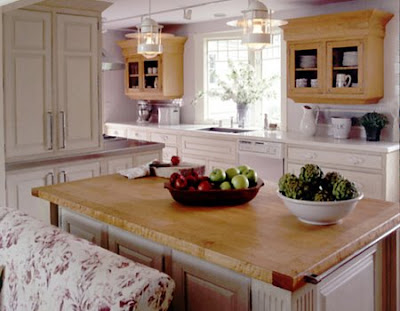 The kitchen is has such charm. I love the antique hanging cabinets and butcher block center island. Notice the antique towel bar on the end of the island. 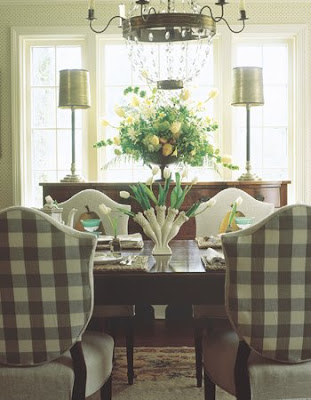 This is a lovely dining room. Notice the detailing on the chairs with coordinating upholstered checked backs. The lamps on the side board and beautiful chandelier complete the look! 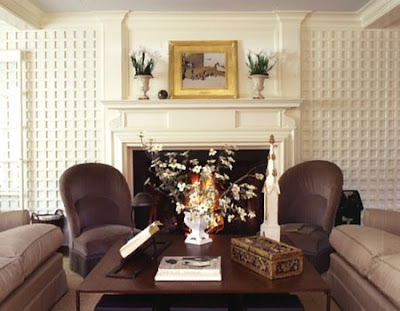 Finally, the living room - what interesting detail on the walls. This is an inexpensive way to cover not so perfect walls and add unique detailing at the same time. If you are ever in Portland, Maine head to her store SIMPLY HOME -a great collection and worth the trip.