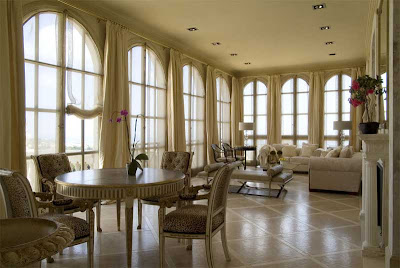 Ana Ros is a very talented Interior Designer in Barcelona. With 25 years of experience as an antiques dealer, Ana tried her hand at interior design 6 years ago. She has had great success; winning the Andrew Martin Award for Interior Design in 2005. Since then she has launched her own line of furniture, lighting and accessories. Let's have a look at an apartment she recently completed in an affluent enclave on the Maresme coast, a few kilometres north of Barcelona. 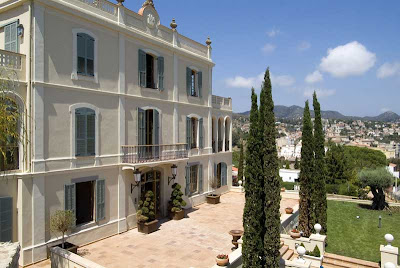 This stately building, which houses several apartments, has wonderful mountain and sea views. Ana, inspired by the neoclassical style of the facade, designed the interiors to be formal and glamorous. Ana is often quoted as having “a classical reinvented style, very timeless and that in spite of the time passing by, it never goes out of fashion". 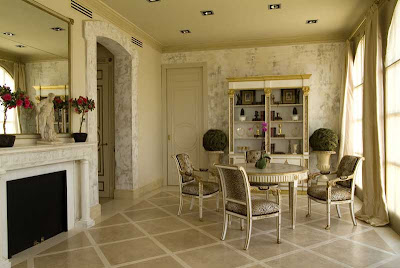 Inside the apartment, we discover the very image of glamour. Ana Ros' philosophy is: after a careful study of her clients needs she likes to incorporate the glamour of the forties and apply it to her clients lifestyle and taste.

At a first glance, we feel as if we are in the house of a Hollywood star from the forties, although small nuances remind us of Gianni Versace, a favorite of the owners. Ana's preferred colors are golds, silvers and rusts, highlighted with a patina. For the furniture, the designer relies on pieces from the forties and fifties mixed with French antiques, accompanied by silks, velvets and thick linens. Areas in this room which I think are worth noting are the airy, ethereal window treatments, which enhance, rather than overpower the view and the limestone flooring set on the diagonal. 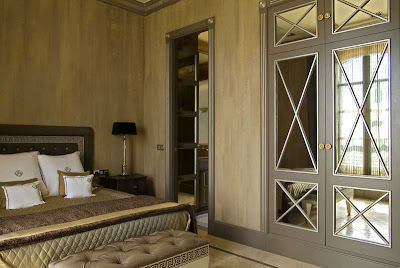 The owner of the apartment wanted to give his master bedroom suite a different feeling, but seeking a Versace touch too. 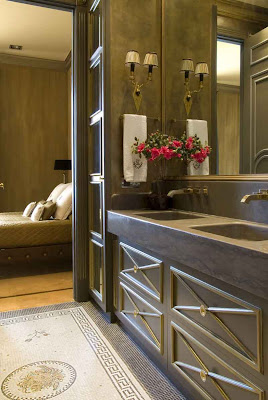 The jellyfish, a favorite sea creature of the owner, was reproduced on the floor of the bathroom, made of a single piece of travertine marble. 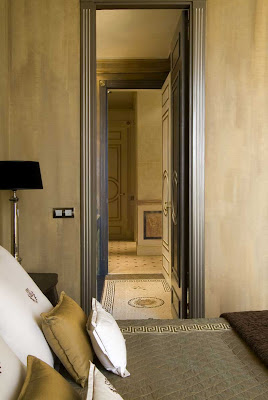 To achieve the elegance the owner wanted, Ana included rich tapestries. In addition, some gold was added to the walls, which were elaborated with decorative paint. This process was also done on the doors, cabinetry and cornices in order to achieve a richer look. 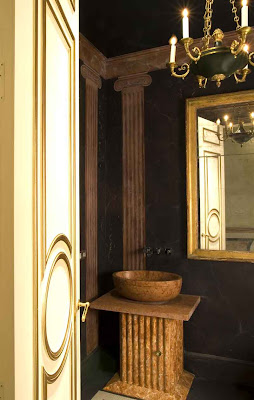 The owner also wanted drama and elegance in the guest bathroom. 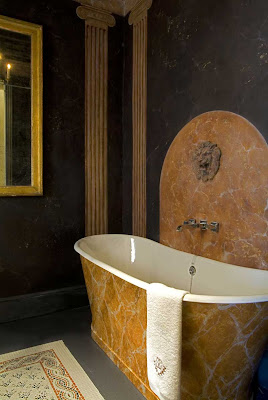 Here marble is mixed with gilded mirrors and faux painted columns add even more drama to the spectacular tub. Notice that "carpet"which is actually an intricately patterned travertine floor.
To see more of Ana Ros' work visit her website. It is filled with many fabulous interiors, as well as her new line of furniture, lighting and accessories!
Posted by Willow Decor at Tuesday, June 09, 2009